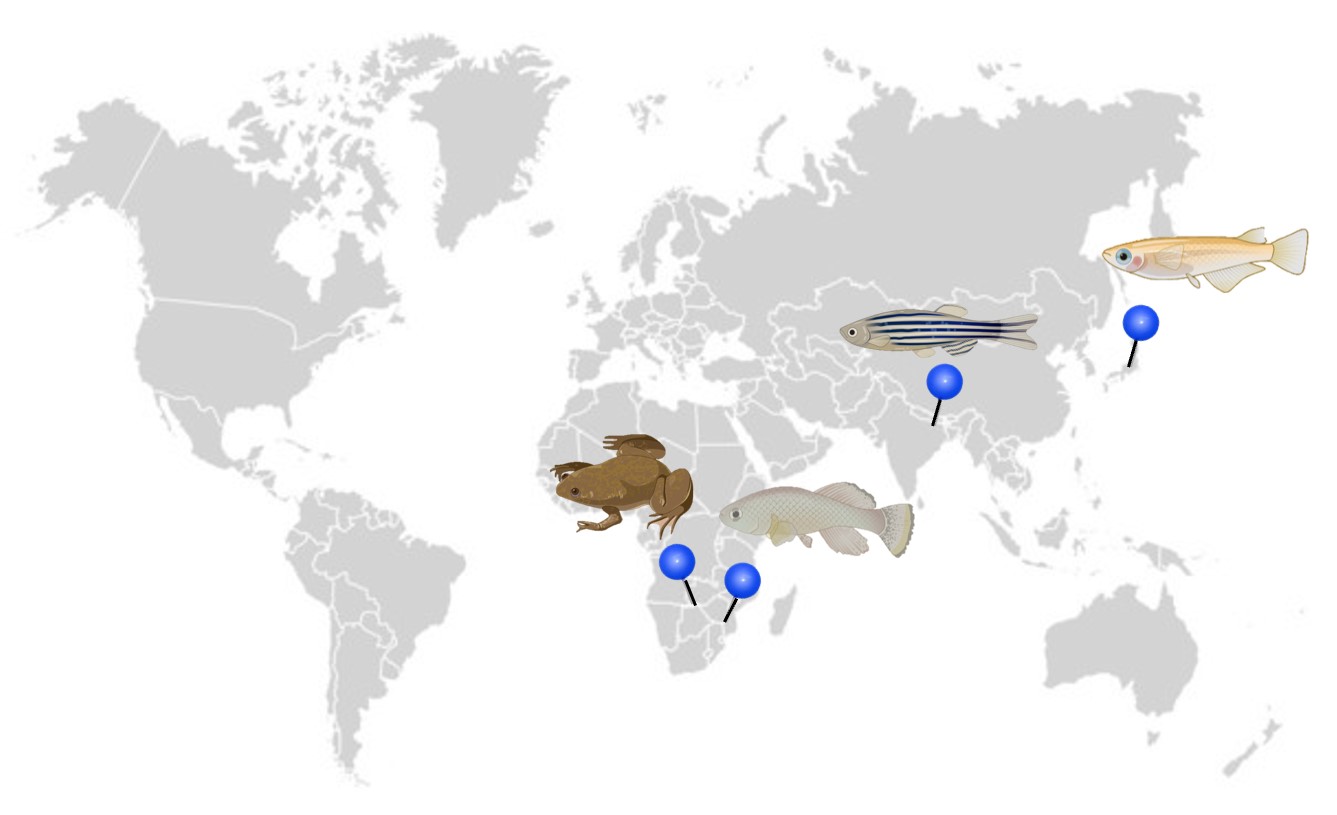 Did you know that the EggSorter works with small biological entities from different species: from zebrafish, medaka and killifish eggs to xenopus oocytes and embryos? Sounds cool, right? But do you know where these species exactly come from and what they are used for in research? This article presents the ecology of these organisms and gives a glimpse of how they are used in research.

The zebrafish is used as a model organism in laboratories because they are easy to feed and breed, their eggs and larvae are transparent and they have a short generation time. Moreover, the European Union Directive on the protection of animals in research doesn’t protect their eggs and larvae until 120 hours post-fertilization (1).

The zebrafish (Danio rerio) is a native Indian species. Initially they were found in the river Ganges and its branches in India, Bangladesh and Nepal. Zebrafish can also be found in Sri Lanka and Myanmar. All these regions have a monsoon climate with a dry, hot season and a season with heavy rainfall and lower temperatures. Besides, humans have an impact on their distribution. We can also find zebrafish in rice fields, irrigation canals or stock ponds (2,3).

The water where they live varies greatly between seasons, from 6°C in the rainy season to 39°C in the dry season (2,3). They live in shallow, slow moving streams and during the monsoons they also live in still pools. The water is generally clear except in the rain when the mud, sand or gravel on the bottom come up (3). In the wild, zebrafish can live in water with pH levels between 5.9 and 9.8 (3).

In the wild, zebrafish are part of a complex food web. They are omnivorous: they eat algae, phytoplankton and plant material, as well as insects, zooplankton and small crustaceans (2,3). And they are prey to other organisms such as snakehead fish, knifefish, catfish and birds such as herons (3).

Breeding in the wild appears in the monsoon summer when ephemeral pools appear (2). Gravel substratum is the perfect site to silt as it gives the perfect protection to the eggs (2).

Their preference of breeding site is an important consideration for increasing breeding efficiency in the laboratory. Some mating tanks are designed to reproduce the natural environment with beach style and gravel textured bottom.

The Japanese medaka is used as a model organism for many reasons. One of them is that medaka are eurythermal which means that they are able to survive in an environment with high variable temperature (4,5). This capacity induces that it is possible to keep embryos at 4°C to slow down the development in the way to provide researchers with longer time for manipulations (4). Moreover Medaka reach sexual maturity in only 10-12 weeks (6).

The Japanese medaka (Oryzias latipes) is native to Asian countries such as Japan, Korea and China (4,6–8). It inhabits marshes, ponds and irrigation canals (6,7). the water has to be at a 60 cm minimal depth (8). The fact that they are eurythermal allows them to live in water whose temperatures are around 0°C in winter and 40°C in summer (4).

The breeding season is from May to August because spawning is under control of light, temperature and food (4). The optimal temperature for reproduction is 27°C (6).

The medaka is omnivorous : it eats both animal and vegetable food (4). Their diet is composed mainly in zooplanktons and phytoplanktons (4).

Unfortunately, medaka in Japan are decreasing because of their habitat deterioration. They are listed as “Vulnerable” in the Red List of Threatened Animals of Japan (7).

The African turquoise killifish is a model organism in genomic, regenerative medicine, developmental biology and ecotoxicology (9). This killifish is mainly used to study aging because it has a natural small lifespan with a median of 4-6 months  and to study diapause (10). Diapause is a dormant state in which killifish eggs can be stored.

The African turquoise killifish (Nothobranchius furzeri) come from dry regions exclusively in southern Mozambique and Zimbabwe (9–12). The killifish live in an ephemeral pool with water temperature between 20°C and 36°C and extremely turbid conditions caused by the absence of vegetation and the presence of cattle who release organic materials in ponds (9). When the dry season arrives and the water evaporates, all adult fish die and the only survivants are eggs (9). But how is it possible ? Female killifish lay eggs at pool margins into a substrate composed of an alkaline swelling clay (9). When the water evaporates, eggs can enter in diapause for years, waiting for better environmental conditions (10). This suspended phase is under genetic determination and in this state all developmental processes are suspended. At this stage,  the eggs can tolerate various stresses (10).

The African turquoise killifish is a predator of small vertebrates, small crustaceans and insect larvae (9). N. furzeri are eaten by birds such as herons and by lungfish (9). Freshwater crabs can extract fish eggs from sediment and eat them (9).

Due to this ecology, conditions in laboratories are quite different than for other species. The researchers have to put the eggs in peat and to be sure that the eggs won’t remain uncovered for more than 5 minutes to avoid their desiccation (13). To know when eggs are ready to hatch, researchers must see gold-pigmented irises (13). At this stage, the peat can be covered with cold water (15°C) (13).

The African clawed frog (Xenopus laevis) is native from southern Africa (14,15). However, due to its ease of adaptation, we can also find it in Mediterranean climate (14,15), in places such as Europe, North America and South America (16).

In Africa, this frog species distribution covers South Africa, Lesotho, Swaziland, Namibia, Botswana, Zimbabwe, Mozambique and Mali (15). In the wild, Xenopus laevis can live up to 14 years and inhabits slow moving or stagnant water (14,16). Diet analysis demonstrates that it eats both terrestrial and aquatic prey. Beetles, flies and woodlice are the terrestrial prey. Aquatic prey are zooplankton and benthic invertebrates (14).

Xenopus laevis can easily adapt to different environments as these frogs have the capacity to tolerate salinity, starvation, temperature fluctuation and anoxia (16). In drought conditions, the african clawed frog can migrate to another pond. Migration is also observed in normal conditions for breeding to decrease cannibalism (15).

The African clawed frog success in adaptation makes them to be considered as invasive species in many countries as they feed from local organisms, like fish and small invertebrates. The consequences of their introduction are a biodiversity decline in the area. In fact, they eat the same organisms that local amphibians and are more competitive than them (17).

All these organisms have a special ecology and environmental niches. Understanding and taking into account their natural way of life can help to optimise their breeding and housing in laboratories.

However, it is not easy to completely understand how they live in the wild as it is quite challenging to follow an individual for a long time. To understand their behaviour, scientists have to collect them and study them under artificial conditions. Besides, the ecology of aquatic organisms has one more level of complication, since they are involved in many human-animal interactions.