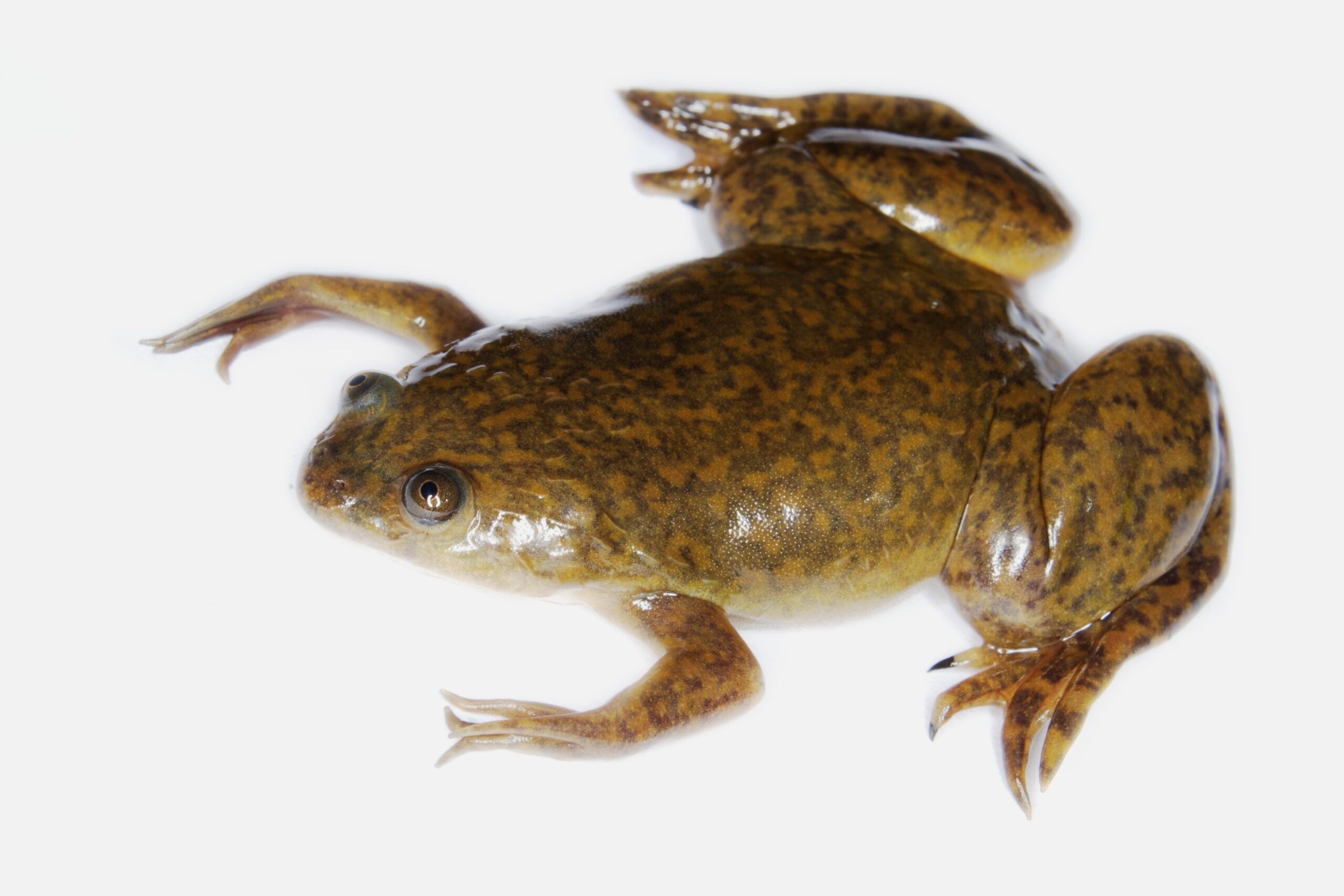 Over the past couple of weeks, you might have encountered men of all ages, proudly wearing a freshly grown moustache. During the month of November, many men take part in Movember, an annual event which involves growing a moustache to raise awareness around men’s health and in particular men’s mental health and prostate and testicular cancer. World-wide Movember foundations raise money and organise events with the aim of increasing early cancer detection, diagnosis and effective treatments. While raising awareness and increasing early detection may prevent many deaths, a better comprehension of the disease, efficient detection methods and effective treatments are urgently needed. Cancer research exploits many tools to model the disease and uncover mechanisms related to tumour development and metastasis and uncover novel therapeutic targets. While murine models are the favourite organism models in the field, other models can offer different advantages. We have already discussed multiple times the benefits and drawbacks of using zebrafish for biomedical research and cancer studies. Today, we will discuss the benefits of using Xenopus laevis as an organism model and discuss how it can be exploited in various biomedical research areas.

Xenopus laevis is a species of frogs among the Xenopus genus. It is an aquatic species, which can commonly be found in lakes, rivers and swamps in sub-Saharan Africa. Xenopus frogs are excellent swimmers and generally live underwater, although they must come up  from time to time to breathe. Paradoxically, they aren’t very good hoppers and prefer to crawl when found on dry land.

Adult Xenopus frogs are green/grey in colour and are about 10 cm long. In the wild, Xenopus laevis has a life expectancy of 15 years, while in captivity it can live up to 30 years. Male and female frogs can be distinguished by distinctive characteristic traits. Male frogs are slimmer and smaller than female frogs and have black patches on their hands and arms. Females on the other hand have protrusions on their back legs, looking like hips.

Xenopus laevis is a nocturnal frog which’s feeding and reproductive activity occurs mostly during twilight. It lacks a functional tongue or teeth and relies on its hands to push food down its throats and a hypobranchial pump to suck food into its mouth. It is a predator and scavenger and feeds on living or dead prey, including fish, tadpoles and crustaceans and any organic waste.

Xenopus doesn’t have any vocal sacs and therefore cannot croak. Instead, male and female frogs can make mating calls by contracting their laryngeal muscles and producing small clicking sounds under the water. Reproduction happens externally.

Males trigger eggs to be released by squeezing female frogs and fertilise the eggs by spraying sperm over them. The size of a Xenopus egg is about 1.2 mm in diameter and generation time is 1-2 years. 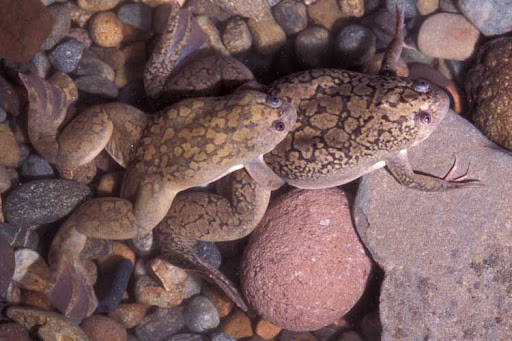 Xenopus as a model organism

Xenopus laevis is a common research model in life science and has proven to be an excellent tool to study biological processes and to model human diseases, due to the numerous advantages it possesses1.

Xenopus has a long history in research and has contributed to many scientific discoveries over the past century. In the 1930s, Xenopus was used to develop the first “pregnancy tests”. Two young researchers discovered that by injecting urine of a pregnant women into the ovaries of a female frog, oocytes were produced in the following 8-12 hours2.

Finally, Xenopus frogs were the first vertebrates to be cloned. By replacing the immature nucleus of an egg by the nucleus of a mature cell from a host frog, a normal frog developed, not only creating an identical frog to the host, but also demonstrating that the fate of a cell can be reversed as all cells possess the information required for the development of a whole organism4 5.

Nowadays, Xenopus laevis remains a popular model organism in biomedical research and particularly in central nervous system development studies. For instance, Xenopus frogs have allowed to get a better insight into the development of the central nervous system, spinal cord formation, cell differentiation and spinal cord regeneration following injury6 7. Studying spinal cord development in mammals is complicated due to its early formation and poor accessibility. Xenopus frogs on the other hand enable excellent visualisation of the process due to their large egg size, egg shell transparency, fast development rate and simple spinal cord organisation6.

Amphibians, as teleost fish, are capable of fully regenerating following injury to the CNS (see our previous article on caudal fin regeneration in zebrafish). Xenopus laevis can regenerate its spinal cord and brain up until metamorphosis when it turns into a proper frog and its optic nerve throughout its lifespan. Therefore, Xenopus can provide valuable insights into the mechanisms of spinal cord, brain and optic nerve regeneration with respect to the cellular and molecular mechanisms involved in such events and contribute to the development of novel therapeutic approaches to treat CNS injuries in mammals8.

0 %
of Xenopus laevis disease genes are shared with humans.
More recently, Xenopus frogs have been used to model human diseases as most genes, signalling pathways, biological functions and organ systems are conserved among vertebrate species. Xenopusfrogs share 79% of disease genes with humans3 9
and are easy to manipulate using various gene editing tools to create transgenic frogs.

With the idea of facilitating and supporting human disease modelling in Xenopus, Xenbase – a database dedicated to Xenopus as a model organism – was founded3. Xenbase gathers Xenopus research data and links genomic, epigenetic, mRNA and protein sequence information to gene expression and function. Moreover, Xenbase links orthologue genes, enabling effective translation between human and Xenopusdata. Among the 50’000+ articles found on Xenbase, 18 major disease groups for which Xenopus was used as a model were identified. Nervous system, genetic, sensory system, cardiovascular, musculoskeletal diseases and cancer comprise the largest disease groups using Xenopus as a model.

The role of Xenopus in cancer research

While Xenopus laevis is not the prototypical oncological model system, frogs have proven to be an excellent tool to investigate cell cycle mechanisms, cell metabolism, cell signalling and cell behaviour in the context of tumour development10. Xenopus offer in vivo as well as in vitro models to study cancer as in addition to whole embryos, Xenopus oocytes, egg extracts and cell cultures can be exploited3 10. For instance, cell free extracts have been useful to study cell cycle derangements and biochemical events which control DNA replication, repair and cell cycle arrest, which can promote tumour development when dysregulated10. On the other hand, Xenopus oocytes have come in handy to investigate cancer metabolism as their size enables microinjections and single cell measurements. They have been particularly useful to study glucose metabolism in tumour cells10.

Whole Xenopus embryos possess a particular advantage as a cancer research model as there is a strong parallel between tumour pathogenesis and metastasis and xenopus embryogenesis10 11. Indeed, several signalling pathways involved in early embryonic development are somehow reactivated in cancer and promote tumour development and metastasis. Wnt signalling for instance is critical for cell proliferation, differentiation and migration and body axis establishment. However, that same signalling pathway has been found to play a crucial role in tumour initiation, growth, progression and invasion in several cancers, including breast and prostate cancer. As the Wnt signalling cascades are well conserved, assay methods have been developed in Xenopus frogs, enabling signalling regulation investigation as well as therapeutic screens, targeting Wnt inhibition10.

Upgrading the Eggsorter to Xenopus eggs!